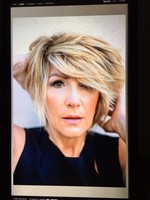 Natalie Gandy- Vocalist - "I played in several Central Texas bands through the years and also spent time in the studio performing ‘jingles’ for the radio, toured with my own band "Leather and Lace" performing top 40 Country, Rock and traditional music.  We were front the front band several groups like Exile, Asleep at the Wheel, Michael Martin Murphy, Eddie Raven, and John Connelly to name a few.  Later moving to Nashville, this afforded me several opportunities to sing off of Broadway street including the famous or infamous “Tooties”.  After moving back to Texas in 2016, I met Paul Reitz and he introduced me to two additional amazing musicians, John and Bill and offered me the opportunity to sing with “The Friends 4 Band.”

Paul Reitz - Guitar - A native of Pittsburgh, Pa, Paul fell in love with the guitar at an early age. While in college and graduate school at Penn State he studied privately with Ed McGuire  and Bill Walton (Sandoli Studios) and performed in a variety of settings as a soloist and leader of a jazz trio.  Paul studies classical & flamenco guitar with Robert Guthrie and performs as a soloist and member of several contemporary christian groups throughout DFW

Bill Brott - Bass - After playing electric bass in many rhythm and  blues bands during his high school years, Bill Brott left his home state of Texas to attend The New England Conservatory of Music. While in Boston, he played Upright Bass in many pick up jazz bands and symphony orchestras. Upon his return to Texas he picked the electric bass back up to play with several blues bands including Josea Robeson and The Midnight Believers, The Occasionals,  as well as The Armando Natera Experieonce and several others.

John DeBellevue -  Piano - John DeBellevue grew up steeped in the rich musical traditions of South Louisiana, playing piano all along the coast. After college, he moved to New Orleans, where he played in various jazz bands, leading his own band at the New Orleans Jazz and Heritage Festival. Since moving to DFW, he has played with various big bands and small groups.