December 100 Case Challenge is On! 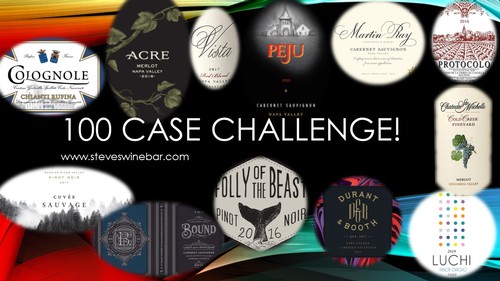 We are ecstatic to announce our new Holiday 100 Case Challenge.  We want to give you an incredible deal and sell 100 cases of wine in December. Help us achieve this goal by ordering online, or in store, and pick up here at Steve’s Wine Bar.

We’ve heard over and over again people love what we are doing here at Steve’s Wine Bar, but then tell us they continue to shop for their wine at big name retailers. We want to give you a reason to take the short drive to downtown Denton and shop with us. We have chosen 21 different wines which we are personally familiar with which will deliver immense value for you. We are discounting them at or below what you would spend at these other retail locations.

Buy two or more six packs of the same wine, or mix and match these six packs, to get the best bang for your buck!

We have worked with our distributors to put together a lineup of fantastic six-packs featuring some of the most respected names including: Peju, Chateau Ste Michelle, Trinchero, Neyers, and many more from a variety of regions around the world.

A few examples of the wines we are offering are:

This limited-time offer can net you some of the greatest names in Napa Valley for less than what you would pay at box stores, online, and other large establishments. If you desire to purchase just one 6-pack of wine, you are welcome to do so. BUT when purchasing two or more of these 6-packs, use promo code DEC30Off at checkout online for an additional $30 off each six pack!!!

Visit our website at  steveswinebar.com/Our-Wines-and-Products/Specials  to see all 21 wines available for you to take advantage of this month.

If you see a wine or two (or three) that you want to learn more about, we have an opportunity for you this weekend to stop by and grab a small sample of many of these wines so you can “try before you buy”. Stop in this weekend, 12/11 - 12/13, Friday night between 5pm and 7pm, Saturday between 4pm and 7pm and Sunday between 4pm and 6pm to sample the wines you are most interested in.

If you are looking for another wine which we don’t have in stock or in this special purchase event, let us know and we will see what we can do to get you your desired wine for a great price. These special orders will also go against our 100 Case Challenge! :-)

We hope you will be part of this fun challenge and grab some incredible wines. We are looking to you and all our customers to help us through this next round of COVID shutdowns and keep the business viable into 2021. We will continue these specials, and may add in some other wines before the end of the month. So if you have a wine you are interested in having us research for this challenge, let us know.

Thank you in advance for your participation in this special program.

All product is advance order, Order online or in the shop through Sunday, and each week orders will be placed with our vendors on Monday for delivery later that week for pick up. You will be notified by email or phone when your product arrives at Steve’s.

In the Spirit of Giving

When stopping by this weekend, please bring some shelf stable foods to fill this box by our front door. 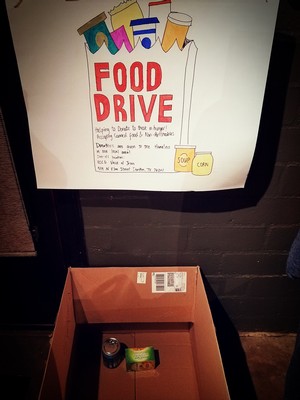 We want to remind you that we are supporting the UNT Student Roteract group with their project to feed the homeless and others in need. Please drop by this week with some shelf stable foods and let's help out this group of young adults and support their project.

Employee Tips: With this new shutdown, please consider posting an Employee Tip during the holidays to share with our team. steveswinebar.com/product/Employee-Tip

Argentina is first and foremost known for its love of Malbec and its status as its leading global producer.  So it only makes sense that if the mountainous, valley-laden terroir of Argentina is amenable to Malbec, then other Bordeaux varieties would thrive there all the same; including Cabernet Sauvignon.  The grapes used in the Black Cabra label come from some of the most commercially and critically successful vineyards in Mendoza; responsible for brands such as Tapiz and Zolo.  Following an extended cold-soak maceration to extract the rich shades of ruby popular in Argentinian reds, the juice is aged in French oak for 8 months, resulting in an approachable, style-appropriate version of Argentina Cabernet.  The wine pours a rich ruby color with purple hues and minor rim variation; offering aromas of dark red and blue fruits accented by granite and black pepper.  The palate is full-bodied with well-integrated tannins, offering crunchy dark cherry and blue fruit notes supplemented by cassis and vanilla.  There will be a number of steak wines on this list, so alternatives are needed.  Think a rich, spicy beef stew that plays well with the fruitiness and structure of this wine.

Though Bordeaux is most prominently known for its producers listed under the 1855 Classification such as the first growths of Château Mouton Rothschild and Chateau Haut-Brion, there are a plethora of lower-designated producers making wines that demonstrate some of the key features of Bordeaux-based wines at a significantly-friendlier price point; with Mission ‘St. Vincent’ among them.  This a blend of Merlot and Cabernet Sauvignon sourced primarily from Entre-Deux-Mers, an area of Bordeaux primarily known for dry whites and a universal focus on all Bordeaux varieties.  This blend is aged in a combination of stainless steel and oak to maintain acid and freshness.  This wine pours a medium ruby with purple hues, offering notes of fresh, acidic red and blue fruits laced with toasty wood and vanilla.  The palate is full-bodied with appropriate overall structure, offering a mixture of red and blue fruits, herbaceousness, and slight hints of spice.

When we think of Australia, we think of Shiraz; and when we think of Shiraz, we think of dry, hot, sunny regions like Barossa that yield massively fruity and powerful wines respected the world over (Think Grange, Carnival of Love, etc.).  Lesser known are the ‘cold-climate’ regions of Australia, particularly when it comes to red varieties.  Victoria contains acclaimed sub-regions known for Australia’s lesser known wine gems, like the Muscat a Petit Grains-based dessert wines of Rutherglen.  Shiraz, however, has a small, but respected place here as cold-climate variations are created.  Mount Langi Ghiran specializes in these unique iterations of Australian Shiraz, and the ‘Billi Billi’ is no exception.  This wine pours a garnet hue; lighter in contrast to its counterparts in Barossa, offering aromas of cherry, black plum, and blackberry accented by notes of violet and black pepper.  The palate offers medium, but well-integrated tannins accented with lip-smacking acidity; all enveloping a core of blue and black fruits.  Pair this with braised meats in order to create a dichotomy of controlled and hedonistic richness.

The result of Rich Salvestrin’s vision for an accessible, but overachieving California red, ‘The Cult’ is a blend of primarily Cabernet Sauvignon, Merlot, and Petite Sirah sourced from Lodi.  The deep ruby color offers aromas of black cherry, vanilla, cigar smoke, and bittersweet chocolate.  Globs of milk chocolate and raspberry make up the palate, with sweet tannins and a lengthy, complex finish rounding the experience out.  This is a versatile food wine that could easily go with a multitude of cuisines.

Does the name of this winery look familiar?  It should!  We featured Chateau Nozieres’ base Cahors on the Gold Club back in June and it was a smash hit!  As such, we decided to feature one of their premier products on the Platinum list, and wow, is this a stunner!  As a quick recap, Cahors is the original champion of Malbec, with its ‘black wines’ dating back to the 16th century.  All Cahors must be at least 85% Malbec, with Merlot and Tannat being the only legal options for blending.  The ‘Ambroise de L’Her’ is 90% Malbec and 10% Merlot, and goes through 14 months of aging in French Oak.  The nose is INTENSE, with crunchy black fruits cut with coffee, hints of vanilla and herbs.  This wine is immensely structured, offering dense tannins and bright acidity around a core of plum and blackberry.  If there is any wine that could be singled out on this list as ‘steak-friendly’, it is undoubtedly this.  Pair with a ribeye and enjoy!

If you have ever asked Brian about Zin, you have likely heard him drone on about how it differs drastically from area to area; wishing the whole way he would stop talking.  Some point during these monologues, you have likely heard that Napa-sourced Zin’s are generally more structured in comparison to its various counterparts; which is true!  Oakville is quickly becoming a favorite, with Michael Pozzan’s version being an excellent style-appropriate example.  This Zin sees an impressive 18 months in a combination of French and American Oak, yielding a decadent, dark ruby hue.  The nose offers plush raspberry, hints of stone fruit, and pungent black peppercorn.  The palate is very full-bodied, with supple, sweet tannins and toasty oak accenting reduced raspberry, juicy cherry, and milk chocolate.  I’ll say it once, I’ll say it again: Zin and BBQ is beautiful, and this pairing will serve you well!

For the first time since last year, we have a bonafide ‘old vine’ blend in SWB!  This is a blend from winemaker Katie Carter of Zinfandel, Petite Sirah, Alicante Bouschet, and Carignan sourced from some of the most respected appellations in CA for all of these varieties.  This blend is aged 15 months in a combination of Hungarian and American oak.  This pours an inviting blend of ruby and purple, offering aromas of boysenberry, raspberry, black-tea and spicy mesquite.  The palate is predictably rich and full-bodied, with Petite Sirah’s quintessentially dusty tannins showing through, along with macerated raspberry, black pepper, and bramble.  This is an upscale, juiced version of the ‘old vine’ style, and shows its increased nuance and care in spades.

J. Lohr?!?  Hear us out!  This is a restaurant-only offering from Paso Robles giant J. Lohr, but one that goes much beyond its reputation as grocery wine producer.  This blend takes everything unique to Paso and recklessly turns it up to 11, offering a wine deserving of its namesake. This blend of Cabernet, Petite Sirah, Syrah, and Malbec is aged for 18 months in a combination of French and American Oak.  The look is decadently ruby, completely opaque in quality.  The nose offers a combination of fruitcake, bright cherry, and vanilla supplemented by subtle spice.  The palate is rich, creamy, and full-bodied with velvety tannins and balanced acidity.  There is a decadent core of mocha, vanilla, and fruit that deftly rides the line between acceptable and overkill, offering one of the most decadent reds I have seen here in my time at Steve’s.  Food pairings?  You need something ridiculously decadent to stand up to this; think braised short ribs.